A traditional Japanese home situated in Iga, a town redolent with history.
Why not spend a while here the way you like,
whether it’s for a stay, or to enjoy the cooking…

Located in the northwest of Mie prefecture, Iga is a historical town known as the home of Iga-ryu Ninja. Iga Megumi Souan sits on Iga soil and brings to life a traditional Japanese home, which are hard to find nowadays. Iga Megumi Souan is accommodation that can be booked for private use by up to 10 guests. It’s also a cooking studio equipped with a traditional hearth and a pizza oven handmade by artisans. And it’s a space where you can get together and spend the time the way you like. Nearby you’ll see the single-track local train leisurely moving through the scenery with mountains and rice paddies, harking back to the Japan of a generation ago, and letting you soak in time’s gentle flow.

Thinking about a stay?
Looking for a rental space?
Access
Iga Region

Thinking about a stay?

Appeals of a stay 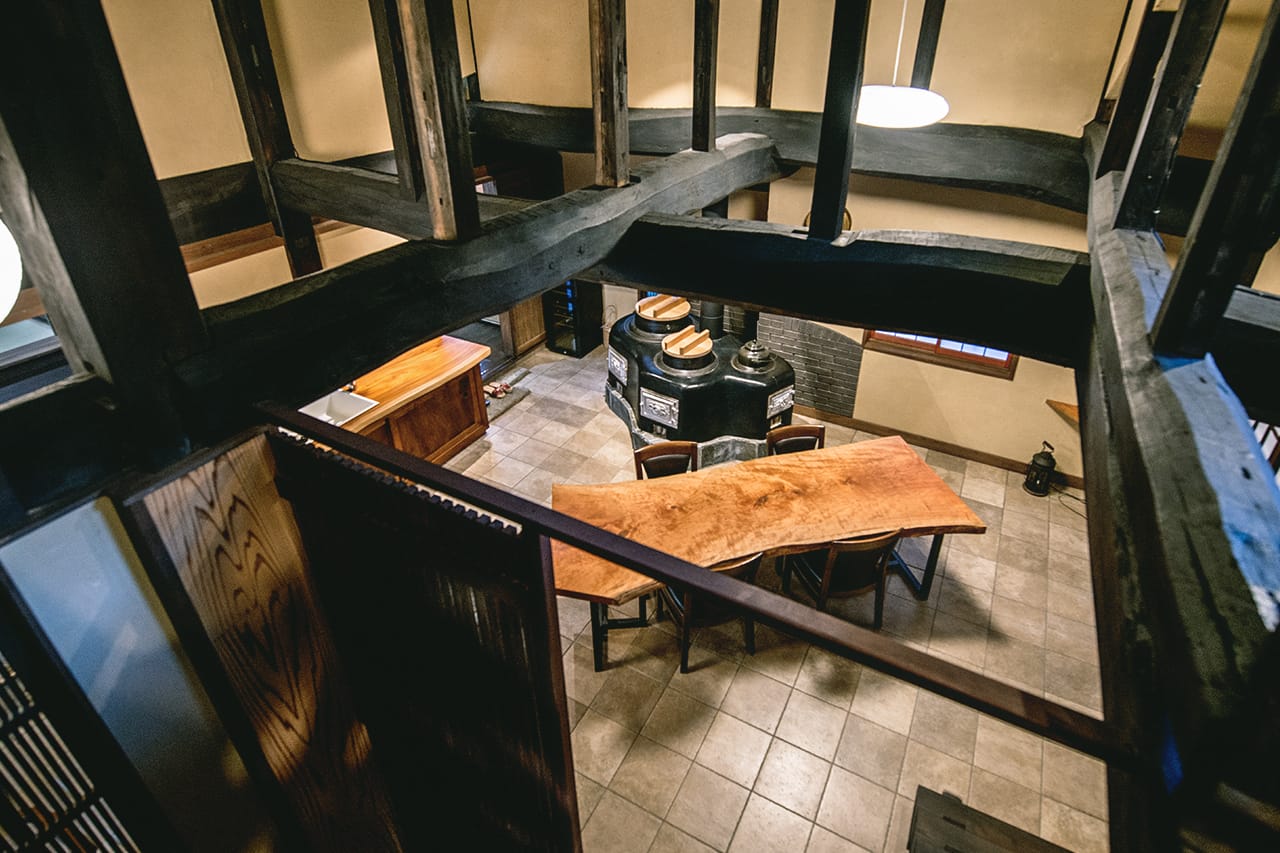 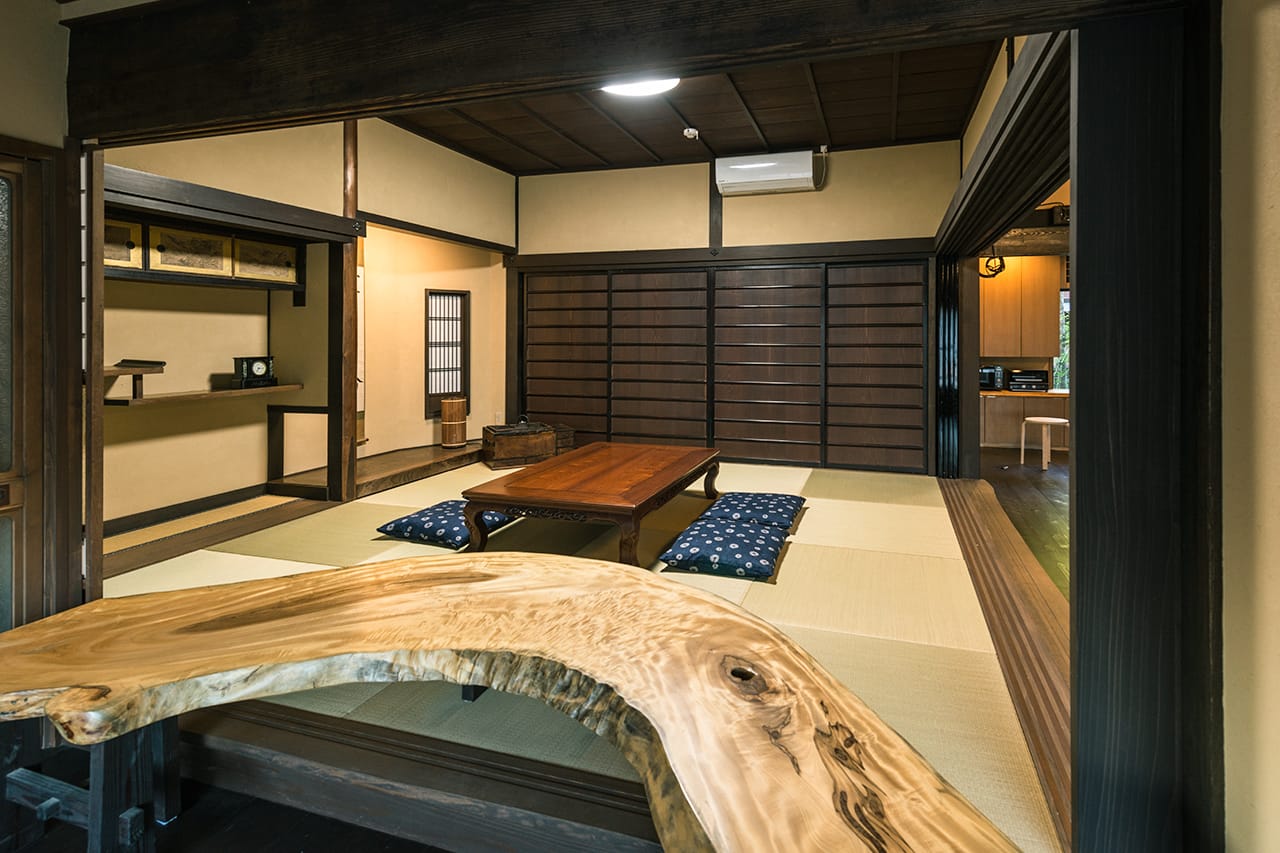 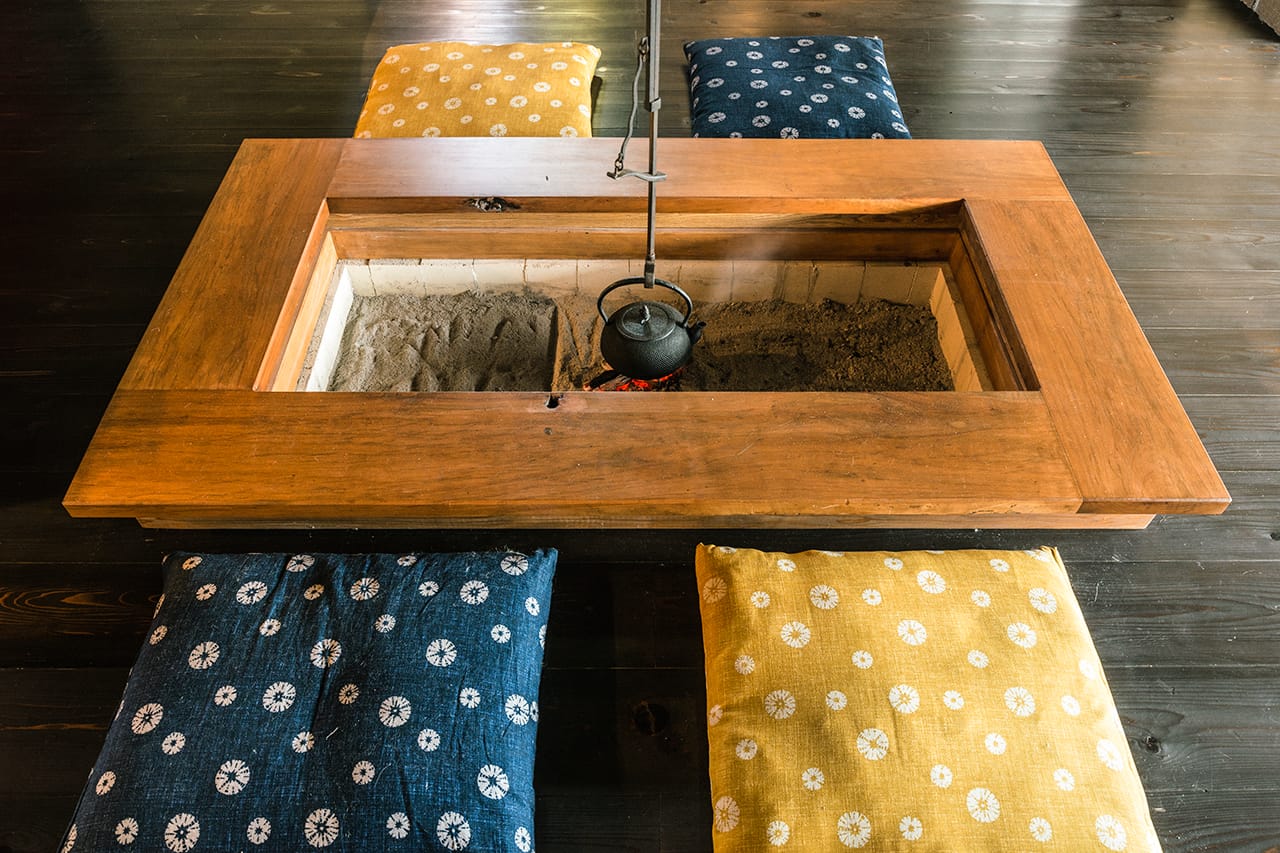 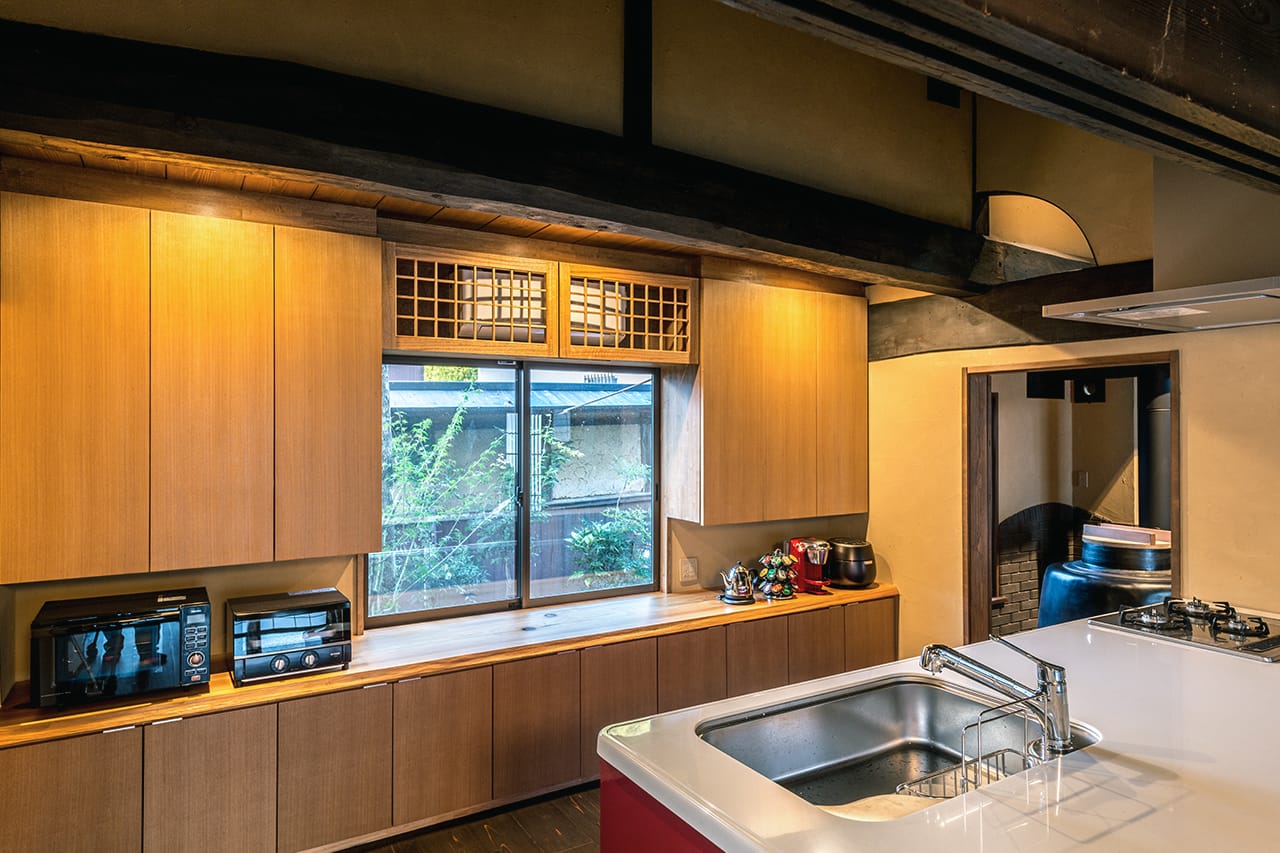 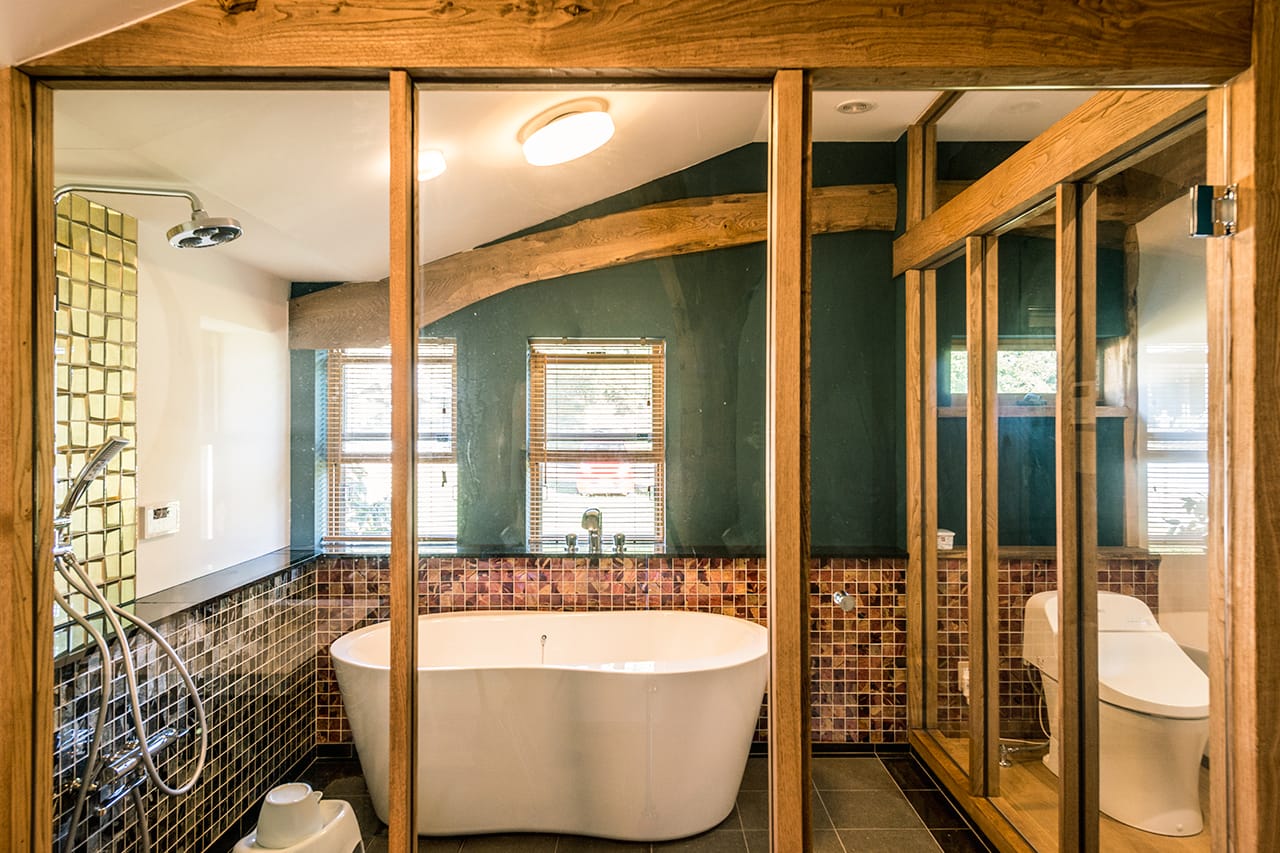 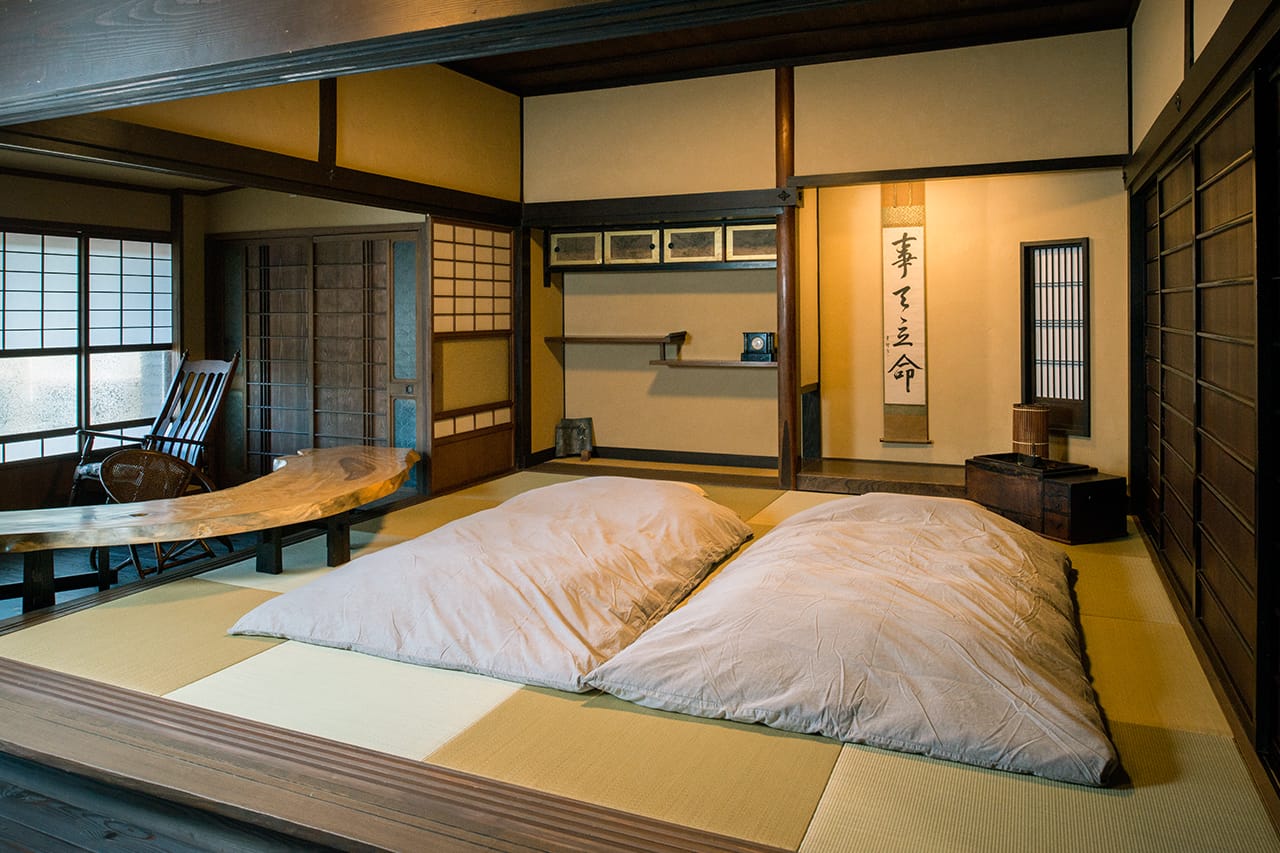 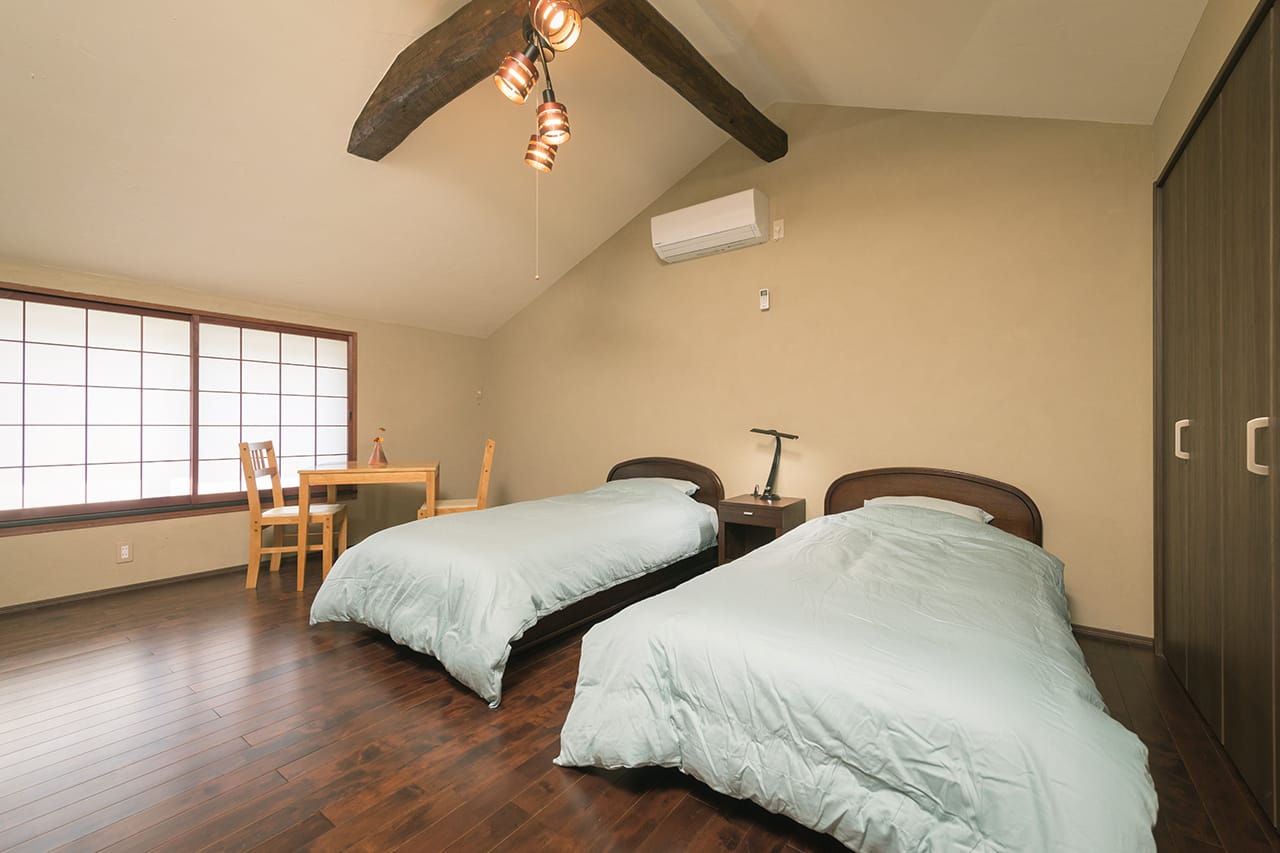 While bringing to life the good old-fashioned traditions, the kitchen has been fitted with an easy-to-use system kitchen, and the wet areas, the bathroom and washroom, etc., have the latest in modern conveniences. Careful attention has been paid to design, with the bathroom, for example, featuring glass screens and tiled walls with stylish colors. The wide open, easy-to-use spaces offer excellent comfort, to make your time here extraordinary. Iga Megumi Souan offers both a Western-style room with beds and Japanese-style rooms with futons, so you can choose the way you sleep according to your preferences. 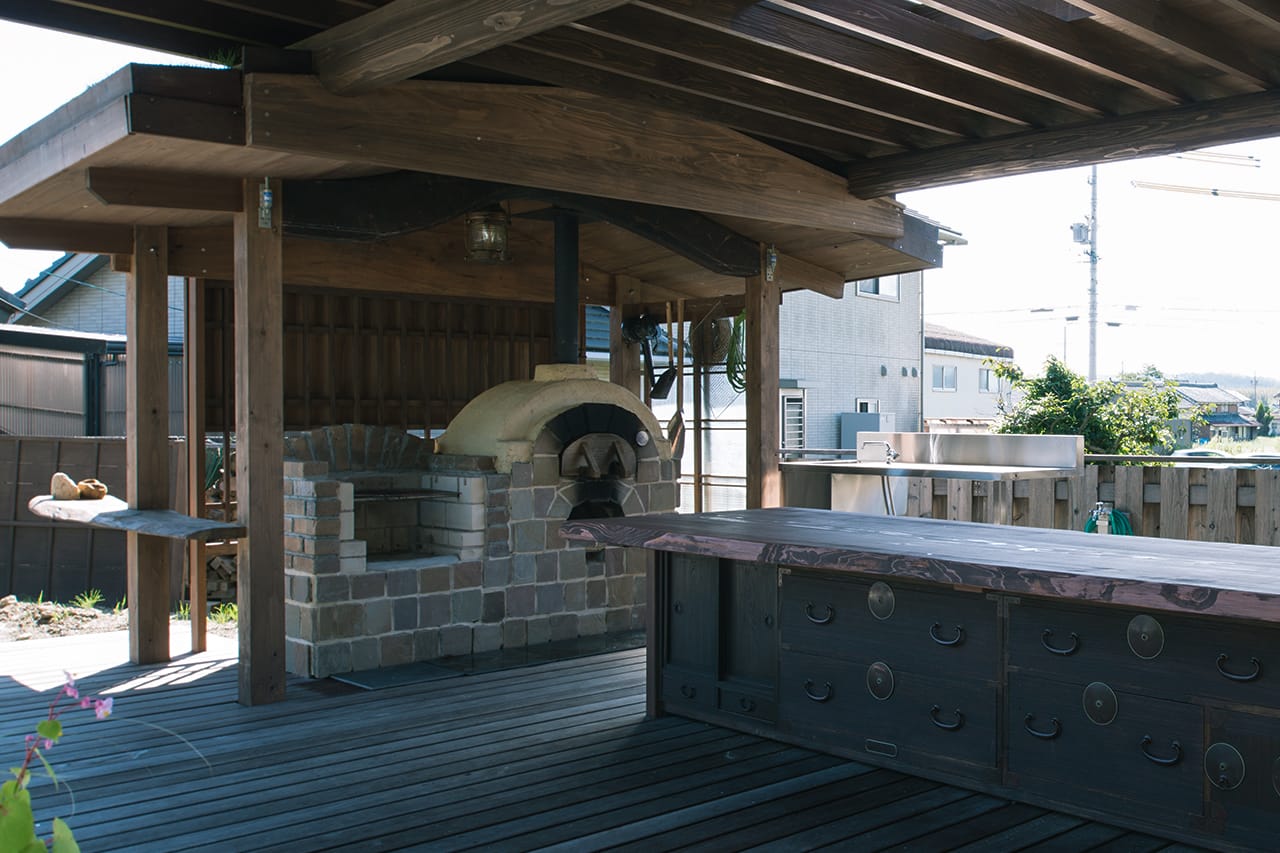 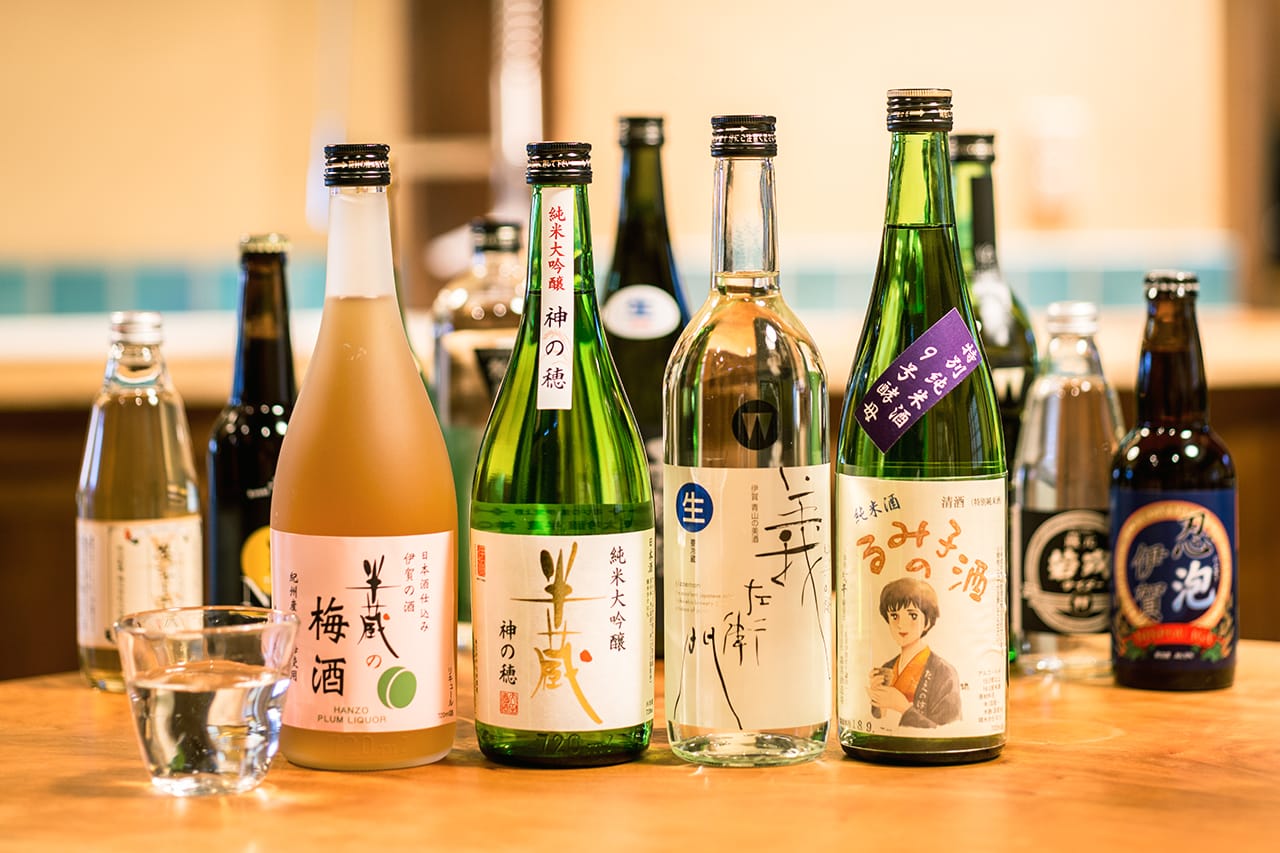 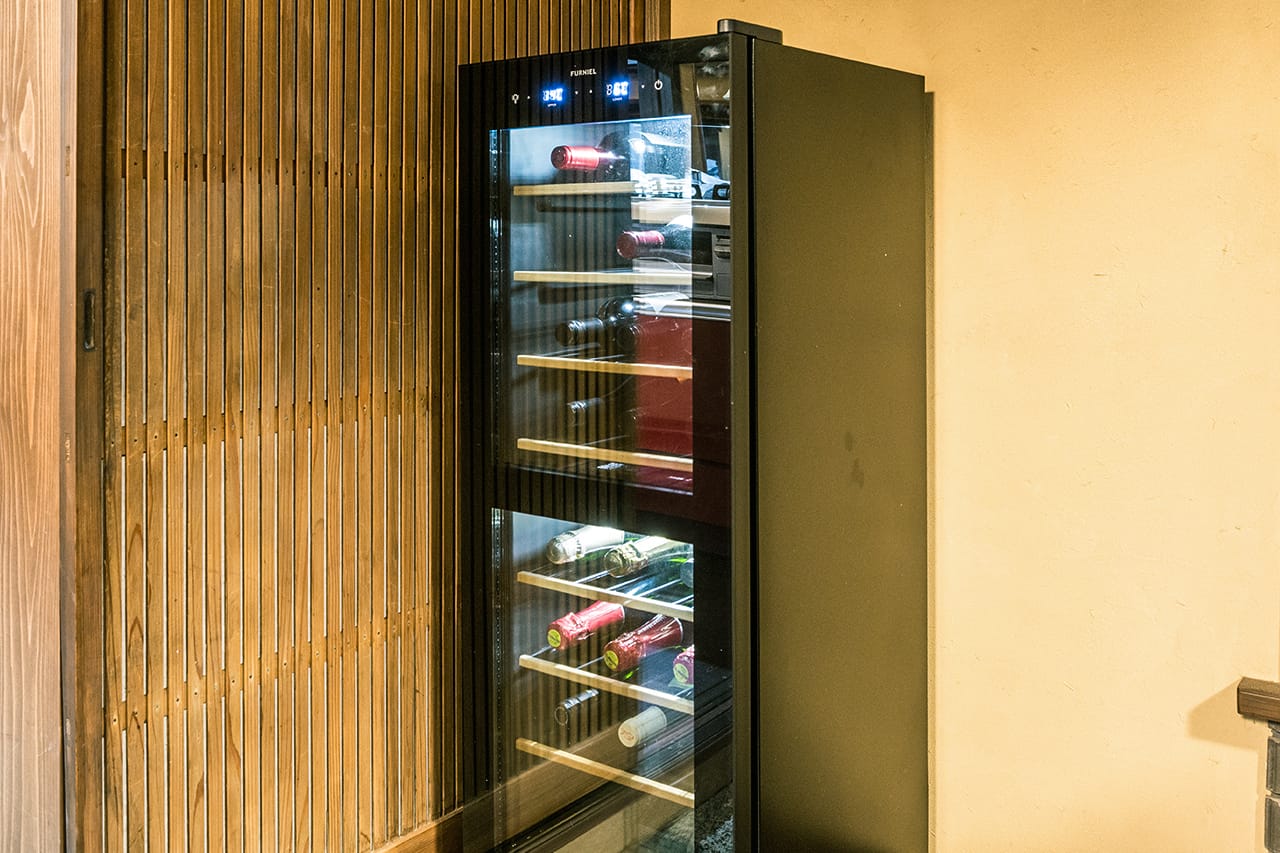 The tastes of historical Iga

Guests are free to use the cooking equipment and enjoy cooking together with friends or family. If you wish, we can provide the ingredients for your BBQs including plenty of Iga beef, or the ingredients for your Japanese or Western breakfasts. Please ask us about this service. Iga beef is a rare commodity, it is in limited supply and is not usually available outside this area, so the chance to try it is another special benefit you can only get with a stay in Iga. Blessed with high-quality rice and pure, clean waters, Iga is also a sake production region with a historical background. Sakes from 5 distinctive local breweries are available at Iga Megumi Souan, so we hope you take the opportunity to enjoy them. Also available is a wine cooler stocked with champagnes, sparkling wines, and red and white wines, starting with reasonable choices. 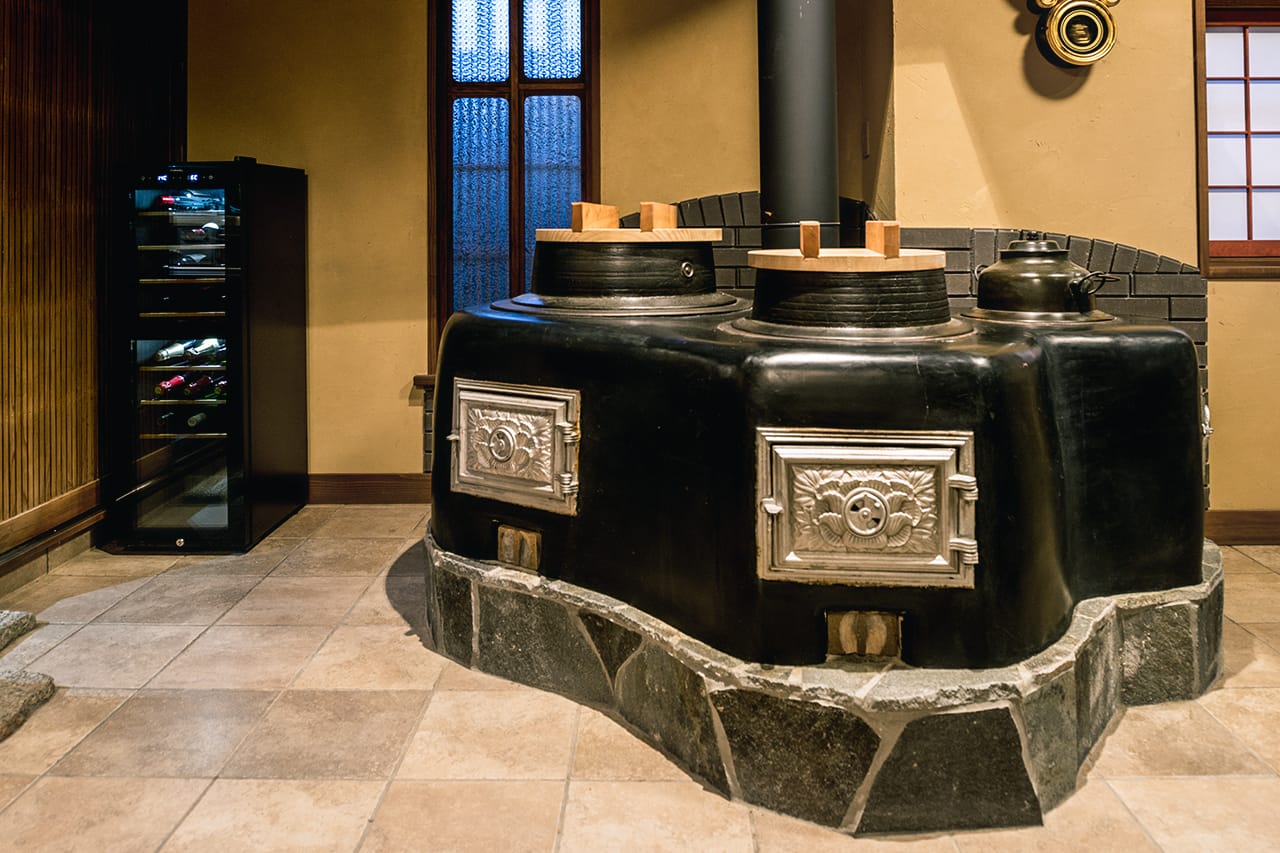 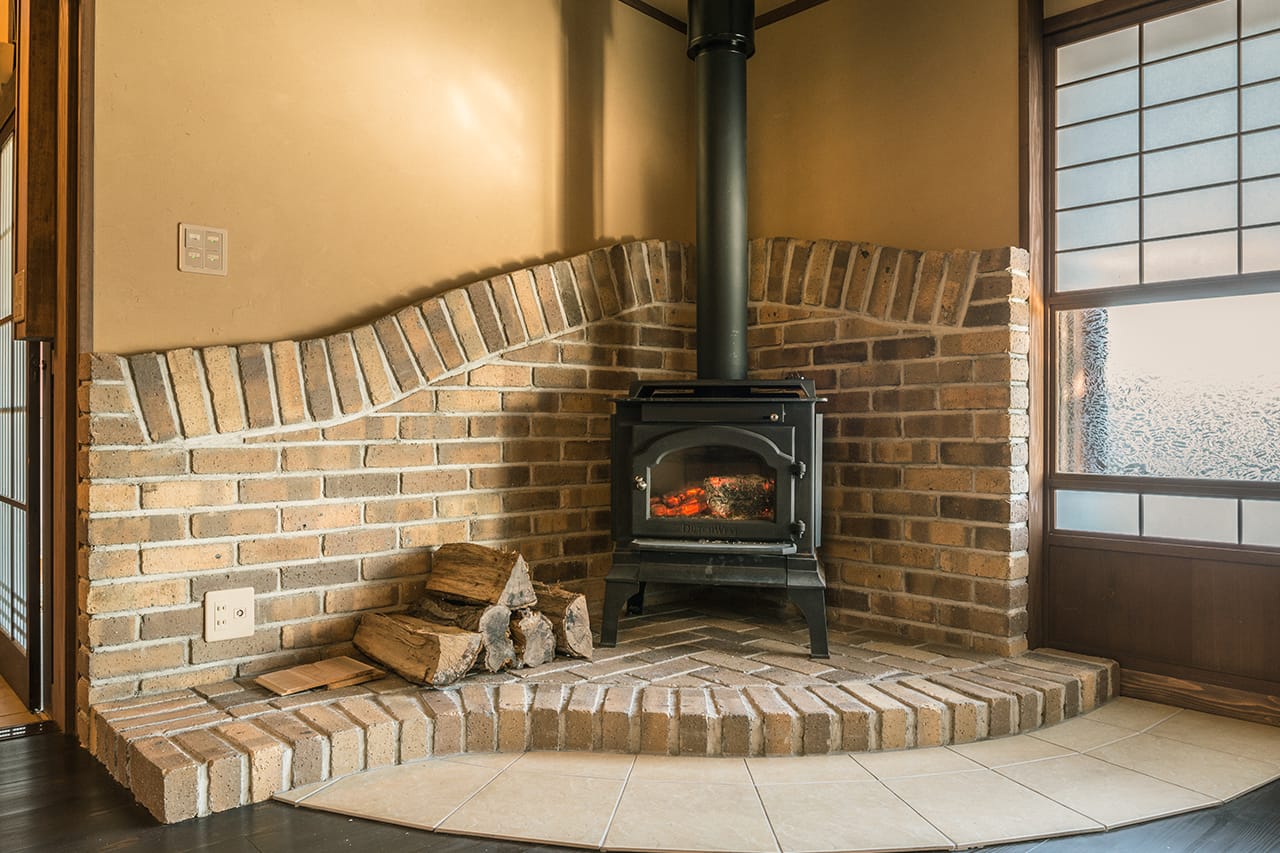 Cooking and heating with wood fires - A treasured experience

Iga Megumi Souan boasts a hearth, pizza oven, and wood stove, all wood-fired. Cooking and heating with wood fires is uncommon nowadays, so that in itself makes for a special and distinctive experience at Iga Megumi Souan. Rice cooked on a wood-fired hearth has en exceptional taste that you don’t get with an electric rice cooker. Baking pizzas in a wood-fired pizza oven will surely be a treasured experience. The US Dutchwest wood-fired stove, carefully selected by the owners given their fastidiousness about wood-fired stoves, is easy and safe to use, even if you’re using one for the first time. Wood is always on hand, so guests are welcome to use it freely.

Cautions
・ Fire is used in the wood-fired stove, hearth, sunken fireplace, BBQ, and pizza oven. Please take thorough care when handling fire. We ask that you keep young children especially in sight at all times.
・ Smoking is not permitted inside Iga Megumi Souan. Please smoke outside where ashtrays are provided.
・Outdoor BBQs and meals may only go up to 8:00 pm.
・Only one car per group may be parked on the grounds. Otherwise, please use the free car park nearby.
・Unfortunately animals (pets, etc.) are not permitted.

Parking
One car per group may be parked on the grounds. Otherwise, please use the free car park nearby. 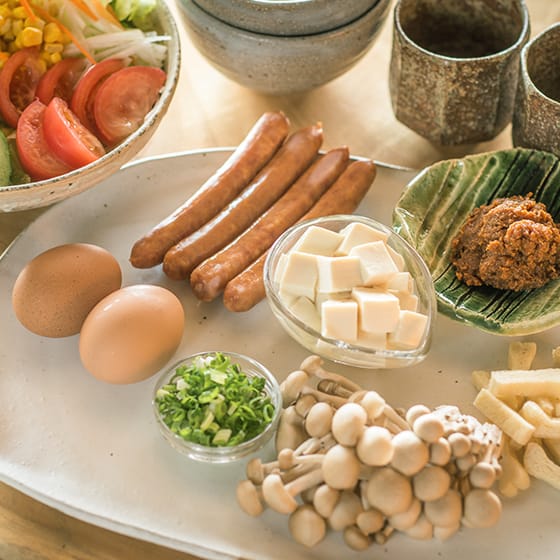 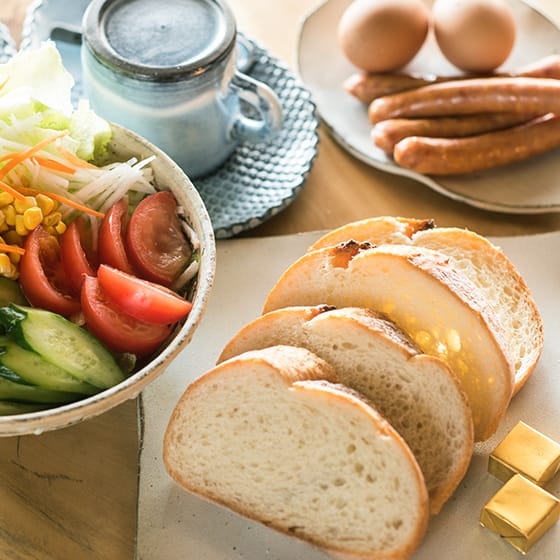 Breakfast ingredients (The photo shows an example. Ingredients differ according to day and preferences.) 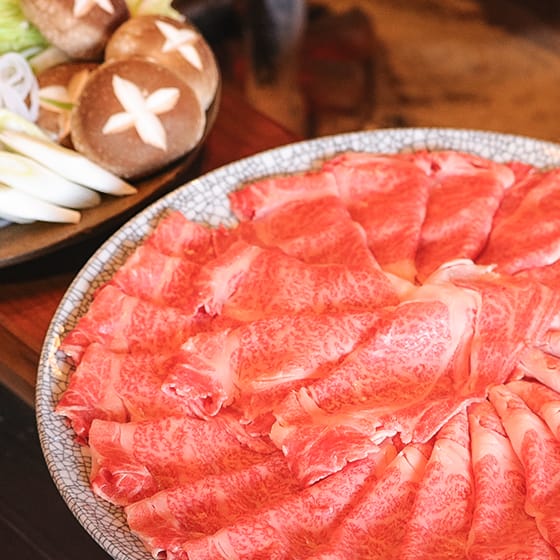 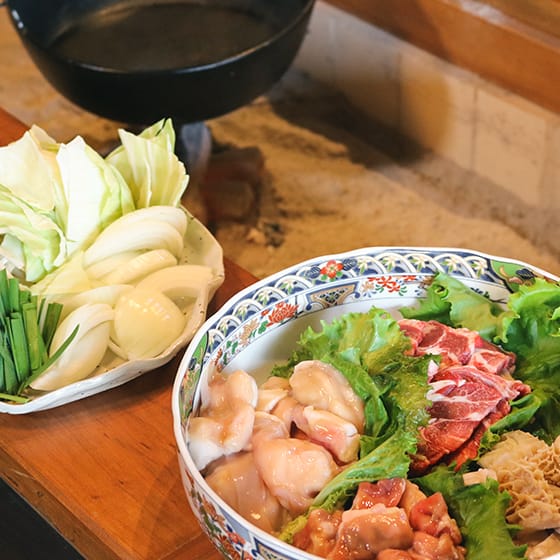 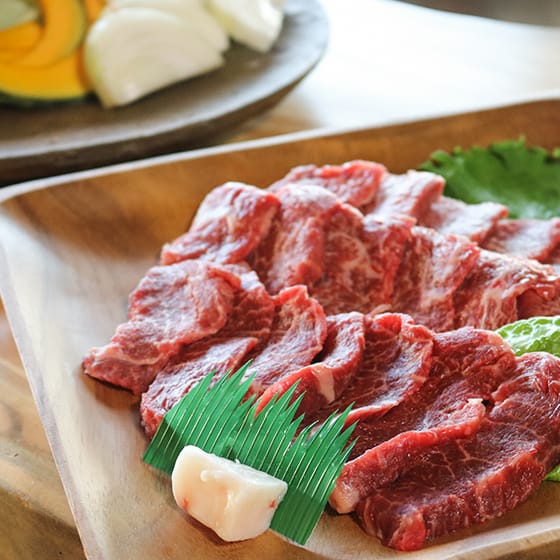 Evening meal ingredients (The photo shows an example. Ingredients differ according to day and preferences.)

Looking for a rental space? 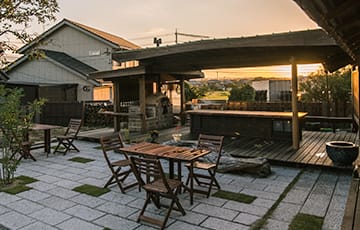 Relax on the spacious wooden deck

Visit with family or friends on your days off and enjoy a BBQ. Take it easy, breathe the country air, and enjoy a meal on the wooden deck. Watch the sunset on fine days. With all the cooking equipment, it’s perfect for a food-related event like a cooking class. 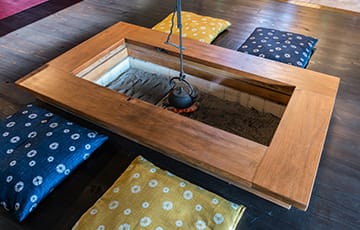 Use the typically Japanese spaces for any number of scenarios. 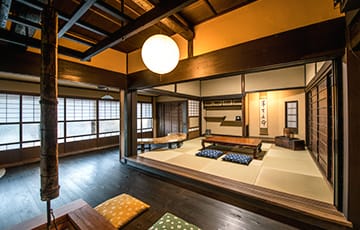 With the dining area and a raised tatami-floor Japanese-style room, the main room has a floor area over 25-tatami mats (about 42 square meters or 50 square yards) offering plenty of room. The sunken fireplace can be covered with a flat floor, making it perfect for all kinds of classes and events. Iga Megumi Souan can also be rented long-term by the week, so it’s a great solution as a pop-up gallery or for solo exhibitions of pottery etc.

Sample uses
Cooking classes; classes in yoga, etc.; solo exhibitions, etc. Can be used for photo shoots (as a location). Uses related to Iga (Mie) are very welcome. Due to proximity to residential area, cannot be used for noisy events, etc.

Cautions
・ Fire is used in the wood-fired stove, hearth, sunken fireplace, BBQ, and pizza oven. Please take thorough care when handling fire. We ask that you keep young children especially in sight at all times.
・ Smoking is not permitted inside Iga Megumi Souan. Please smoke outside where ashtrays are provided.
・Outdoor BBQs and meals may only go up to 8:00 pm.
・Only one car per group may be parked on the grounds. Otherwise, please use the free car park nearby.
・Unfortunately animals (pets, etc.) are not permitted.

Parking
One car per group may be parked on the grounds. Otherwise, please use the free car park nearby.

Please contact us (below) for further information about rates and availability. 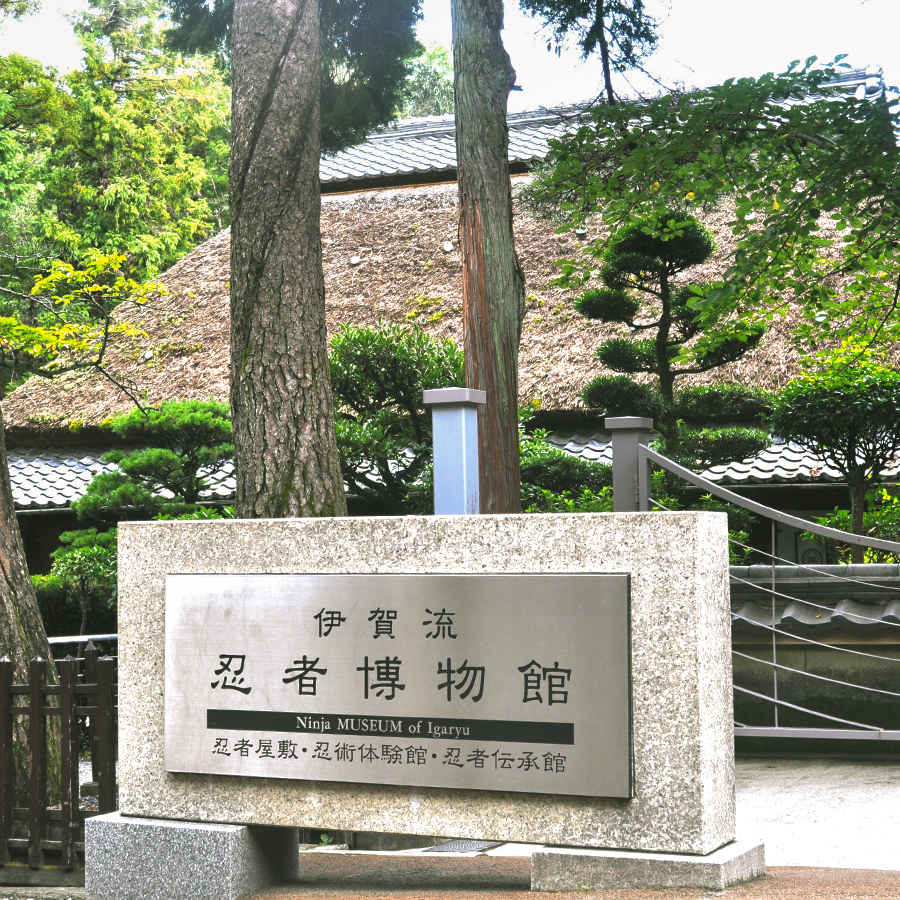 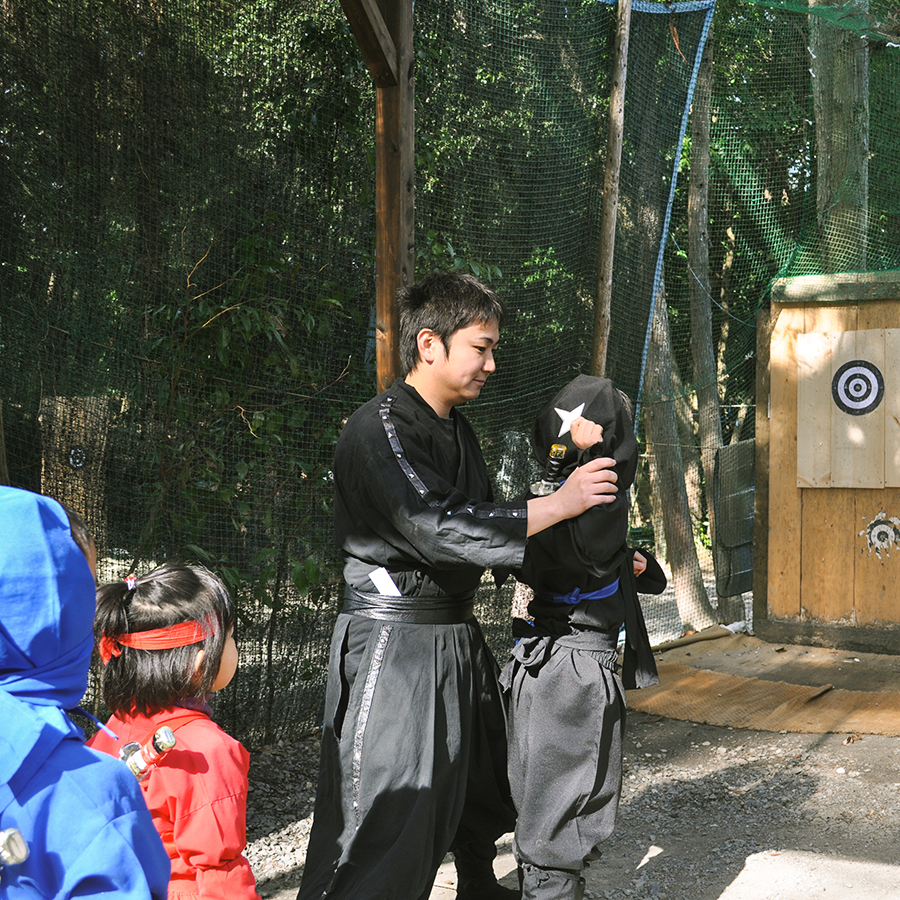 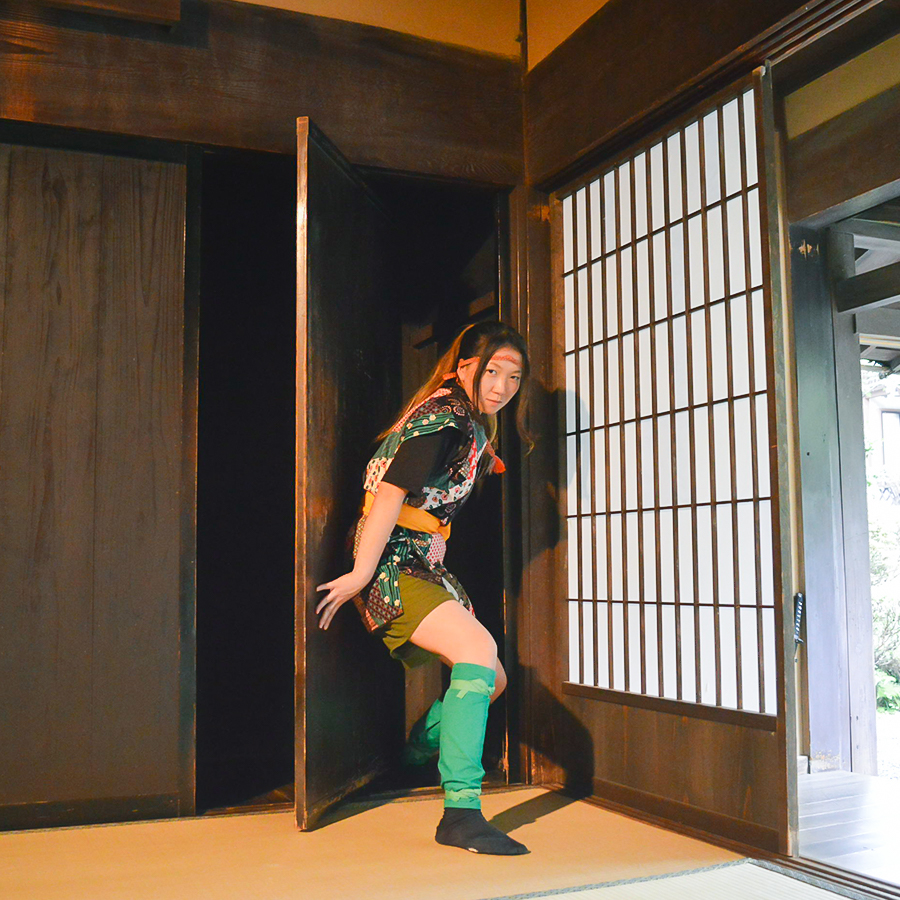 From the Asuka Period (late 6th to early 8th century) to the Edo Period (1603-1868), ninjas are said to have been used to infiltrate the enemy to spy on and trick them. “Iga-ryu” is the general term given to the school of ninjutsu (ninja skills in secrecy, stealth, and unconventional combat) brought to Iga Province, and is said to have originated in the Kamakura Period (1185-1333). Along with the Koka-ryu of Koka, Shiga Prefecture, which is just over the mountain from Iga, Iga-ryu is a ninjutsu school renowned throughout Japan.
Iga-ryu ninjas were considered particularly adept at kajutsu (firearm skills) using gunpowder balls, etc. and magic techniques such as kuji-kiri (hand-gesture incantations), which use 9 hand signs, and incantations with 9 characters (letters). These ninjutsu skills are said to have been described in a book in the Edo Period, which has been handed down the generations and survives to this day, kept by a long-standing family in Iga. There are numerous places related to ninja culture in Iga, the Iga-ryu Ninja Museum for example, so visitors can learn about and experience ninja culture first hand. We welcome you to get in touch with the living history and culture of Iga through ninja culture.

The museum is a reconstruction of the Dogo Yashiki (local clan’s residence), said to have been built in the late Edo Period (1603-1868). Located in various parts of the house are trick mechanisms, including dondengaeshi (revolving door), nukemichi (escape), and kakushido (hidden door). A kunoichi (female ninja) will guide you around the house demonstrating them as you go. Enjoy watching the ninja show and trying your hand at shuriken (ninja star) throwing.

Standing in the heart of Iga is Iga Ueno Castle, a symbol of the city. After his transfer to Iga, Sadatsugu Tsutsui received orders from Hideyoshi Toyotomi to commence construction of a castle that was the initial incarnation of Iga Ueno Castle in 1585. He built a three-storied castle tower, the same as the current construction, and the foundations of the castle town.
After the start of the Edo period, Takatora Todo, a closely trusted vassal to Ieyasu Tokugawa became the daimyo (feudal lord), took over command of the castle, and began major repairs. Originally intended for use in the decisive Osaka-Toyotomi battle, the castle had 10 turrets, and the plan was to build a five-storied tower, which was destroyed by a violent storm while still under construction. The surviving high stone walls convey the scale of the former castle. Traces of the castle town remain in Iga, so visitors will get a sense of the history that unfolded with the castle.

The castle was built in the early Edo period by Takatora Todo, an expert in castle construction. The present-day castle tower was built in 1935 and is known as White Phoenix Castle for its white walls and elegantly shaped roofs. On display inside the castle are arms, armor, and artifacts associated with the Todo clan, and the top story offers sweeping views of the castle town. The castle also boasts some of the highest stone walls in Japan. At about 30 meters, they are quite a spectacle.

Iga kumihimo (braiding), a traditional handicraft of Iga, has been used since olden times for traditional Japanese accessories such as the obijime (a decorative string for holding a kimono sash in place). Its history is said to trace back to before the Nara period (710-794), but it began to flourish as a local Iga industry around the middle of the Meiji period (1868-1912). It is said that kumihimo survived as a cultural practice in Edo (former Tokyo), the technique was brought back to Iga, and it grew from then on.
Iga kumihimo is particularly well known as a form of “tekumihomo” (hand braiding), or braiding by hand, and boasts 90% of the share across all of Japan. Using braiding threads of beautifully dyed silk or gold and silver, tekumihimo is very fine braiding using a traditional kumidai (braiding stand) such as a marudai (round stand), giving it a very distinctive, unique feel and appearance. Visitors are welcome to discover this fascinating craft and can try making kumihimo at Iga Dento Densho-kan – Iga Kumihimo – Kumi no Sato (Iga Tradition and Folklore Museum – Iga Kumihimo – Kumi no Sato).

Kumi no Sato displays and sells Iga kumihimo and also teaches about its history. The museum runs kumihimo classes. Beginners can make a key-holder or bracelet in about 30 minutes. Kumihimo goods in various colors are perfect as souvenirs of Iga.

Closing date
Closed year end and New Year. May be closed at other times.

For email inquiries, please use the form below.
Select the topic of your inquiry and fill in the details.
We will reply within a few days by either email or phone.
If you do not receive a reply in three days, please call us on 0595-24-3309.